Bokmål or nynorsk – which one should I learn?

What is the difference between bokmål and nynorsk?

The Norwegian language has two written variations which are called bokmål and nynorsk. They are very similar to each other, but still have distinct differences.

English: I have been to Norway twice.
Bokmål: Jeg har vært to ganger i Norge.
Nynorsk: Eg har vore to gonger i Noreg.

Both bokmål and nynorsk are official languages in Norway.

Should I learn bokmål or nynorsk?

Since 90% of the Norwegian population use bokmål, we strongly recommend starting with bokmål. Once you have a solid understanding of bokmål, you might wish to learn some nynorsk in order to understand the differences between the two language forms, although nynorsk and bokmål are very close to each other. 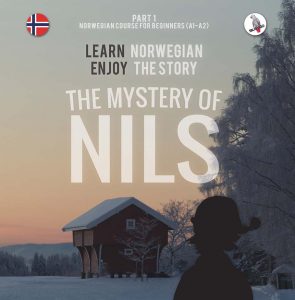 Our Norwegian textbook “The Mystery of Nils” is in bokmål, but in the second part we also discuss nynorsk a bit. The fun thing about this textbook is that you can learn Nowegian with a coherent story instead of boring dialogues. Download a free preview or check out the online course.

The answer might sound confusing: almost no one. Bokmål and nynorsk are written variations of Norwegian. When speaking, most Norwegians use a local dialect which is more or less the same as one of the two written language forms. Although there is a certain trend towards the standardisation of the spoken language in the Oslo region (“standard Østnorsk”), it is extremely common to hear for example, university professors give a lecture in their local dialect.

Why does this small country have two official languages?

Norway was under Danish rule for many centuries, and from the Middle Ages until 1814, all people who could read or write (not so many at that time) did so in Danish. This was no problem since Danish and Norwegian have always been quite similar to each other, and mutual understanding has never been a cause for concern.

From no language to two languages

After gaining independence in 1814, with the rising nationalism of the period, many people in Norway finally wanted to have their own language and get rid of Danish.

Some linguists started to look for the roots of their national language and were convinced they would find them amongst the dialects in the remote parts of the country, especially in the villages of the fjords on the Norwegian west coast. One of those language enthusiasts, Ivar Aasen, travelled throughout the country and compiled a dictionary and grammar of the Norwegian language. From that, Norway got a completely new written version of its language, called “landsmål” (country language) and later “nynorsk” (New Norwegian).

However, for vast parts of the population – especially in the cities – this approach was too radical. They said: let’s stick to Danish and just make it a bit more Norwegian – get the spelling closer to the pronunciation in Norway and add typical Norwegian words. This language form was then called “riksmål” (“National language”) and later “bokmål” (book language).

In 1885 Parliament decided that both forms should be equal, and this prepared the ground for the Norwegian Language Conflict.

War of Vowels, Conflict of Consonants

As if it had not been complicated enough, some government officials got the strange idea of following a language policy which would unite the two forms into one single language, called “samnorsk” (Unified Norwegian). This would be achieved through numerous spelling reforms starting in 1917, when alternative forms for hundreds of words were introduced to both bokmål and nynorsk. Both nynorsk and bokmål advocates were shocked, regarding this as the demolition of their “pure” language versions. The problem was that the reforms were not just a matter of spelling alterations, but they also included some radical grammar changes, which even meant shifting the gender for many words.

At first, the new forms were optional, but they became compulsory in 1938, and only World War II deferred the fiercest time in the Norwegian Language Conflict, which turned the country into a linguistic battleground from around 1950 onwards. Parents corrected their childrens’ schoolbooks and organised demonstrations, poets tried to force their publishers not to make any changes to their work. A culmination of this battle happened in 1962 when TV announcer Sigurd Smebye, who read the weather report on Norwegian state television, used the old form “sne” (instead of the new “snø”) for snow – and consequently lost his job. (Seriously – he only regained his position after legal proceedings which lasted for more than one year. You can read more about this incident here in Norwegian).

You tell me how you spell, and I will tell you how you vote!

The reason for the heated debate was more of a political one than a linguistic one – different political groups felt different affiliation to the language forms: the intellectual elite liked to remain with the Danish-based bokmål, whereas many people from working and farming class preferred nynorsk – and the socialists supported, of course, samnorsk (Unified Norwegian): without class distinctions – and without synonyms.

In 1981, the Norwegian government finally had to give up the idea of unifying the two Norwegian language forms, and most of the forms which had been forbidden from 1938, onwards were re-allowed.

The debate is still ongoing and is probably one of those types of conflict in this world which will never be solved. Otherwise peaceful Norwegians can easily be provoked to fierce discussions about spellings of single words.

There is a joke explaining this situation very concisely:
A young Russian worker travels to Norway, right after the Bolshevik revolution in 1917. He enters a pub and finds all the guests quarreling about something in a flaming temper. He asks one of them: “Does this mean the revolution is starting in Norway, too?” – “Oh no”, comes the response “we are just arguing about how to spell the word revolution.”

Where to go from now

As I mentioned above, I believe in mostly learning bokmål, but also acquiring a few basics of nynorsk.

Our Norwegian textbook “The Mystery of Nils” is in bokmål, but in the second part we also discuss nynorsk a bit. The fun thing about this textbook is that you can learn Nowegian with a coherent story instead of boring dialogues. Download a free preview:

See a free preview of the textbook

Our textbook is also available as an online video course:

Check out the online video course