From professor to student to author: meet Piotr 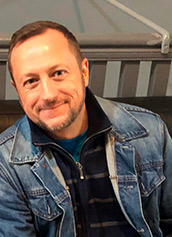 Name any major language of this world: if in doubt, Piotr Gibas can speak it. Originally from Poland, he is fluent in Chinese (Mandarin), English, German, Russian, Spanish … and many others.

Having grown up in communist Poland, with all its travel restrictions, languages have been a key for him to see the world. So he graduated in Beijing, took a PhD at UC Berkeley and became an associate professor for Chinese language and literature at the College of Charleston in South Carolina.

When he wanted to visit a friend in Tromsø, Norway, he decided to learn some Norwegian before his trip. That’s how he found Skapago’s Norwegian textbook The Mystery of Nils. „I instantly liked the concept of learning the language through an absurd story,“ Piotr says.

To dig deeper, he enrolled into the online video course based on the same story. He enjoyed the approach to language instruction so much that he reached out to Werner from Skapago asking whether he would not be interested in making a Chinese textbook based on a similar concept? By that time he had his own (unpublished) teaching materials, which were based on a story about a gay horse Jerry. The story is ambiguous and surrealistic, and it teaches how to use basic Chinese vocabulary and syntax to their fullest capacity. Jerry is a fantastic horse who is both smart and handsome, but also very demure; the narrator needs to constantly seek for his attention; things are further complicated by Jerry’s wicked ex boy-friend Ronny. Students love Jerry and often spontaneously create their own narratives about him in Chinese.

That was at a time when he had a short stay as a research fellow in Erlangen, Germany, just two hours from where Werner is based. They met, and this is how Jerry was born.

Today Piotr is continuing his work on Jerry, while diving deeper into languages such as Créole, Burmese, and Mongolian.

What is your favorite part of the Nils story?

The generational gap between the grandmother (Erna) and her granddaughter. This gap persists and Susanne never really appreciates Nils. I like this bitter realism.

Your biggest challenge with learning Norwegian?

What is one tip you have for a language learner?

You have to sit down and do the work. There is no magic trick to learn a language.