Learn languages through stories: our textbooks

We all hate textbooks for languages that begin with “Hello, my name …“, don’t we? Our textbooks are made up of a coherent story, which starts very simply, but develops into a fascinating novel. Can’t stop reading? Well then ‒ you will have to keep on learning! 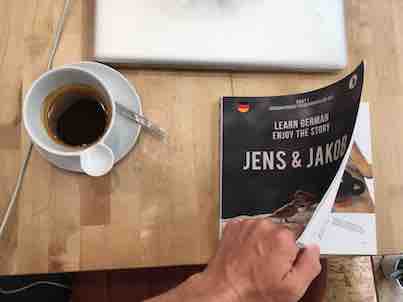 We careful selected the most frequently used words in a language and make sure that the story is primarily made up of them. Separate texts and exercises focus on conversational topics that will prepare you for living in the country where the language is spoken.

Grammar is a headache? Not with our textbooks. Uncover the structure of a language with pictures, casual yet comprehensive explanations, and a lot of easy to remember examples.

Repetition is the key to learning a language.
Every textbook has its own website with a great number of exercises, a vocabulary trainer, videos about pronunciation, and a whole lot more.

The Mystery of Nils

Erna Langvik gives her eight year old granddaughter a special birthday present: a doll inspired by the traditional Norwegian mythical creature Nisse. Nils ‒ as the doll is called ‒ leads a happy life with his new family in Oslo. But due to an accident, Nils finds out that he means a lot more to Erna than just being a birthday present. Without knowing it, he has been carrying a painful secret, and during an adventurous trip to Northern Norway, he helps Erna to make one of the most important decisions of her life.

Volume 2 – for advanced students (level B1 and B2, only in Norwegian)

The story goes through both books, but for students with previous knowledge at level A2 it is not necessary to have worked through volume 1 because the story (and the Norwegian grammar) will be repeated at the beginning of volume 2.

Jens and Jakob are two sparrows living in Berlin. Although the Berlin Wall has been removed for a long time, their life and the lives of the (human) families they are living close to is still affected by the former separation of the city.

Alfred was hit by a car when Sweden changed from driving on the left to driving on the right, and now lives a peaceful life as a ghost. But soon another family is moving into his house, and Alfred realizes they have something to hide …

When Chinese teacher Qi enters his classroom, he finds a horse among his students – Jerry. Jerry is amazing. Despite being a horse, he speaks and writes fluently in Chinese, Japanese, German, and other languages. He also cooks, cleans, listens to music (and to the rain), is romantic, sensitive, gentle … Soon enough, the teacher and Qi move in together and become roommates. Qi thinks about Jerry day and night. Suddenly, there shows up Jerry’s ex, Ronnie, a mule. How will Jerry, Qi, and Ronnie get along?

Jerry is authored by Piotr Gibas, Associate Professor for Chinese Language and Literature at the College of Charleston, and Grainger Lanneau, M.A. student at the National Taiwan University.

Holger Danske, the Danish legendary knight, has been sitting as a statue in the casemates of Kronborg castle in Helsingør for about a century. A girl’s mishap puts an end to his dismal daily routine: when she drops a sandwich on his foot, the cleaner of the castle applies a special detergent which makes Holger come to life. After all the tourists have left, Holger sneaks out of the castle and explores the city of Helsingør. However, coping with modern life in Denmark seems to be more complicated than anticipated …