Are you tired of boring Chinese textbooks? 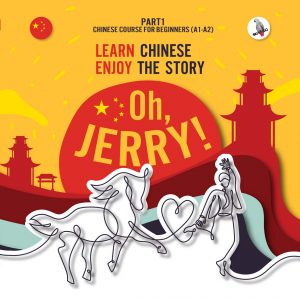 The kind of “Hello, my name is …”.
We are. Definitely. We know that learning Chinese is hard work, but why shouldn’t hard work be fun?

That’s why we created Oh, Jerry! – a Chinese textbook based on a coherent story instead of dull dialogues, which starts very simply, but develops into a fascinating story. Can’t stop reading? Well then – you will have to learn Chinese!

A fascinating story to learn Chinese

No more boring dialogues. Oh, Jerry! is a coherent (absurd) story, which starts very simply, but develops into a fascinating novel. Can’t stop reading? Well then – you will have to learn Chinese!

This is the story: When Chinese teacher Qi enters his classroom, he finds a horse among his students – Jerry. Jerry is amazing. Despite being a horse, he speaks and writes fluently in Chinese, Japanese, German, and other languages. He also cooks, cleans, listens to music (and to the rain), is romantic, sensitive, gentle … Soon enough, the teacher and Qi move in together and become roommates. Qi thinks about Jerry day and night. Suddenly, there shows up Jerry’s ex, Ronnie, a mule. How will Jerry, Qi, and Ronnie get along?

We have carefully selected the most frequently used words in the Chinese language and made sure that the story is primarily made up of them. Separate texts and exercises focus on conversational topics that will prepare you for real-life situations.

Chinese grammar is a headache? Not with Oh, Jerry! Uncover the structure of the Chinese language with pictures, informal yet comprehensive explanations, and plenty of easy-to-remember examples.

But writing Chinese is a nightmare!

Practice Chinese online as much as you wish.

Repetition is the key to learning a language. We will publish plenty of exercises, a vocabulary trainer, videos about pronunciation, videos about how to write Chinese characters, and a whole lot more, on this website. Subscribe to our newsletter to get informed when new resources are available.

Where can I buy the book?

Check out this page.

Is this Mandarin? Simplified characters or traditional?

The book teaches you Mandarin. Although the main texts are written in simplified characters, we also provide the traditional counterpart in the character explanations, so if you would like to learn Chinese to live in Taiwan or other regions where traditional characters are used, you can learn this as well.